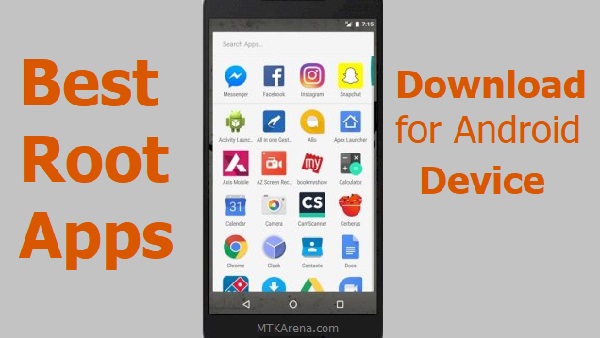 The best root apps help you to get the superuser privilege on your Android smartphone successfully. As you know, rooting is a simple but advanced task. And if you do not use the top rooting application, there is a chance of bricking the device. So we recommend downloading and installing updated and popular root apps to minimize the risk. We have researched and experimented with various root applications and figured out the top tier apps for successful rooting.

The smartphone is an essential part of our daily life; we cannot think without it. However, there are a couple of concerns regarding the phone. Most of the smartphones have limitations set by the official manufacturers. The reason is preventing accidental damage while doing any advanced tasks. But there are many benefits of rooting. If you are aware of the underlying risk and understand the benefits, let’s check out the best 7 root apps for your Android smartphones.

We have researched and narrowed down the best root apps in this post. Few of them require Windows PC, and few of them works without computers that are APK version. The PC version requires you to connect the device to a desktop. Before rooting, you need to install the official USB driver to better connect between PC and mobile.

KingRoot is a simple and easy-to-use Android app that allows smartphone users to root their Android devices successfully. It is known for the one-click root app. You will find both the PC and the APK version. You can use any of the methods. However, your device must use Android 4.2.2 to 5.1. After downloading and installing the app, it will detect the Android version automatically and check for any vulnerability within your phone. If this tool finds any vulnerability, it will start rooting with one click. And within a few seconds, you will see a large green mark if the rooting is succeeded.

KingRoot is the most used and popular one-click rooting app available for Android smartphones. It is a trusted and reliable rooting tool for Android phones; it does not collect any suspicious information. Until now, this app has already rooted more than 100k devices, and it has a 98% success rate.

If you are looking for the best one-click root tool for your Android device, you can choose the KingoRoot app. It has both PC and APK version for your convenience. So select any of the arrangements. However, if you have no PC or low on space, you can download and install APK for rooting your phone.

KingoRoot for Windows provides the best and most effective way to root the device. So the failure rate is really low. However, installing and using the PC version requires USB debugging and proper driver software for a seamless connection. So if these requirements seem tough to you, download the APK file and root the device instantly.

iRoot is one of the easiest and fastest Android rooting software. It is also known as a one-click root tool. Using this app, you will get customizable and admin access to your device within a few seconds. To use this app properly, your Android device must have Android version 2.3 to 5.0.

Similar to KingRoot and KingoRoot apps, this tool has both Windows and Android APK versions. Download whatever version suits you. If the EXE file seems difficult, download and install the APK version for the Android system. Until now, iRoot has already rooted more than 3.8 Million Android devices.

Framaroot grabs our list of the top root app. It allows you to root and unroot your Android smartphones. Like other rooting tools, it has no PC version. That means you can download and install the APK and root the device within a few seconds. Moreover, this tool comes in handy to fix device complications such as hanged, boot loops, and phone lags. Also, using this app, you will be able to get access to your device’s special features.

After rooting your Android device, if you are unsure about the root and want to unroot, you can use the Framaroot app. Like rooting, you can unroot the device with one click and fix errors. Framaroot installs the SuperSU app automatically after rooting the phone. So you do not have to download it separately.

360 Root app is one of the leading Android rooting tools that let you root your Android phone within a few seconds. It is one of the oldest rooting utility. Until now, this app has already been rooted in 9000 smartphones. It supports all Chinese brands, along with superior smartphone brands.

Similar to other rooting apps, 360 Root allows one-click root access. That means you can get root privileges on your Android device. It has a simple user interface, so even beginners can install and root apps. Also, you can uninstall or remove any pre-installed default apps using 360 Root. Apart from rooting the phone, you can clear the cache of your phone using this app.

If you are looking for a small but highly efficient root tool for Android, you can download the Towelroot app. It will take up to 100 kilobytes that allow you to root the phone within a second. Geohot has developed this useful app, and there is no PC version available for you. Only the APK version will complete the task. After downloading and installing this app, open it, and press the “Make it Ra1n” option. Then within a few moments, your device will be rooted without having to restart.

Towelroot is one of the top alternatives to root the Samsung Galaxy S5 and S4. It is highly compatible with rooting the Galaxy series. Besides, using this tool, you can root a Nexus 4 and 5.

CF Auto Root app works quite differently than others. It roots the Android phone based on the firmware file. So, when you attempt to use it, you have to provide your device model to obtain the firmware. And you need to download the custom CF Auto Root tool specifically for your device. So the setup file is different for each device.

CF is the short name for Chainfire. That means Chainfire is the sole developer of this tool. More than 5 Million users around the world have already downloaded and 2k devices have been rooted already.

As we have mentioned earlier, rooting is simple, but the failure of rooting will lead to brick the phone. If you are a beginner and this is your first time, make sure you follow these things.

Android rooting will invalid your device warranty. As soon as you click on the root button, the warranty will be void.

Typically, rooting is a simple task but carries risk. It voids the warranty when you press the root button. On the other hand, your device may get bricked. So we recommend to seek expert guidelines and try for yourself.